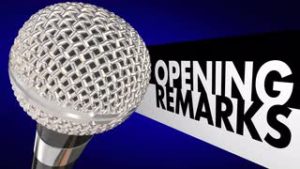 Many lawyers often want to do away with opening statements in the mediation process, believing they are nothing more than formalities that get the backs up of each party and heighten tensions. This thinking suggests that whatever one side hears from the other is going to offend, insult and agitate; so why start a mediation on the wrong foot – and from a position that would seem to make a settlement even more unlikely.

At least that is how the argument goes – and in fact I’ve been hearing more and more mediators blindly agreeing. That is a shame. When approached with  a different sensibility and thoughtfulness, openings are anything but stubborn statements of defiance and rigidness.

First, both mediators and lawyers  are likely to recognize that this may be  the first time both parties have had an opportunity to sit down face-to-face together and explain their positions in their own words. This is not to be taken lightly. In many cases,  three or four years may have already passed since the incident that was the catalyst for the lawsuit that brought them to the mediation.

The parties may have been questioned at an examination for discovery by opposing counsel; but in the mediation session  there is a moment here to really shift the narrative in a positive way. Parties often look to the mediator to work magic and get the deal done; yet settlement  may be more challenging without well designed opening statements.

The American Bar Association’s  Dispute Resolution section prepared a paper on Research of Mediator Techniques (https://www.americanbar.org/content/dam/aba/administrative/dispute_resolution/med_techniques_tf_report.authcheckdam.pdf) that found parties feel better about the mediator the more time spent  in caucus, but not about their situation or the other party. However, mediation is not supposed to be a popularity contest for the mediator.

I suggest that spending more time talking in caucus is not the answer. Mediators can, and I believe should, assist counsel by advocating for opening statements—and specifically their opportunity to outline; the facts of the case that may be presented should the dispute go to court; risks of the dispute not being resolved; setting a constructive tone for the mediation to follow; and establishing an environment conducive to collaboration.

In my experience, either an apology or an acknowledgment by either side in their opening can go a long way to laying the groundwork for settlement. It can often help towards moving beyond long-standing hurt feelings or grudges. Parties feeling better about their situations, and seeing the opposing party in a better light, are often first steps to getting down to the business of a resolution. Don’t be above recognizing that many mediations are about trying to settle files. Even if obvious (depending on the context), stating this fact is important to establishing good faith in your negotiation efforts. Expressing the understanding sincerely that both sides need to work together to reach a settlement is a best practice. This opening helps establish an intention of proceeding with honesty, sincerity, and a sense of fairness, which can go a long way towards establishing the trust and rapport necessary to arrive at a settlement.

I also encourage that, in addition to themselves, counsel have their clients speak in the opening, and in their own words. This can be powerful and instructive for all sides. The opposing side may get an overdue sense of where the other person is coming from, what they have been thinking, and what they are looking to get out of the mediation. It also gives both counsel and the mediator an opportunity to see how the party would come across during a hearing or trial.

This is especially useful in cases when a party is an insurance adjuster. An adjuster can outline what the claimant needs to show as evidence in order to approve a specific monetary amount for settlement.  This is often eye-opening information to the claimant.

Opening statements should avoid using aggressive language that can be interpreted as attacks on personal character, or casting judgements on the honesty and integrity of the opposing side.

I recognize that not all cases are amenable to joint opening statements – such as, for example, those where a party is acting in bad faith and is only attending the mediation because it is mandatory, or where there is a concern of violence between the parties and having them in close proximity could be unsafe. But for the vast majority of cases, mediators can do more than just advocate for having cases begin with openings. Our role can be as champions of respectful and well-considered statements that set up a fruitful dialogue to carry on through the mediation. In short, it is about the parties working together, explaining their positions without casting personal judgement, and answering challenges put forward by the other side respectfully.

Don’t underestimate what is a golden and potentially pivotal moment. A mediator who understands  how a successful mediation can start with a good opening is also one who  may find more of their cases end up being settled.

What has been your experience with opening statements in mediations? What works and what doesn’t? Please comment!

This article appeared in the 100th issue of the ADR Update by the ADR Institute of Ontario; the issue may be found @ https://bit.ly/2NXquU0